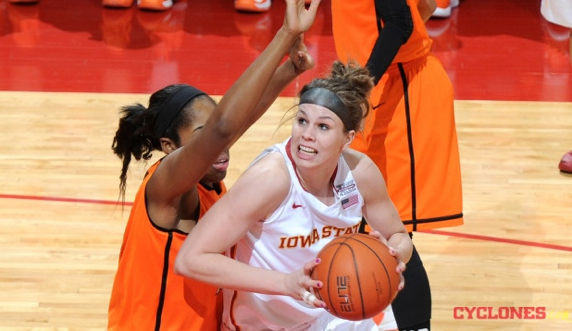 A few minutes before the WNBA draft ended, agent Jeanne McNulty-King’s phone rang, bringing news that could be interpreted as both good and bad for her client, Iowa State forward Hallie Christofferson.

The bad news: the Cyclones senior hadn’t been drafted. The good: as an undrafted free agent, Christofferson would be able to choose her team, and the Phoenix Mercury, the first of a few teams to call, was a perfect fit.

“I was very surprised that she wasn’t drafted,” McNulty-King said. “I’m glad she wasn’t taken by a team just because she was the best available, a team that didn’t have any place for her at all, and I’ve seen that happen a lot, so I think it was better that she kind of got to pick where we go. But I was really surprised. I saw some athletes go before her that she’s much better than, but everybody sees something different.”

The Mercury have plenty of size, bolstered by former Baylor star Brittany Griner at center, but Christofferson believes her days of being exclusively a post are over.

After she played down low purely out of need this season, McNulty-King and Christofferson saw an opening on the perimeter in Phoenix, and they jumped at the offer.

“I think it’s just where I see myself fitting,” Christofferson said.

Phoenix’s roster makeup will resemble the 2012-13 Cyclones, when 6-foot-7 center Anna Prins manned the middle and All-American forward Chelsea Poppens played power forward as Christofferson roamed the outside, much more than last season’s ISU roster, which didn’t have another rotation player above 5-foot-11.

While Christofferson’s position in the post last season may have hurt her draft stock, McNulty-King thinks it can help her going forward.

“We all know what she can do from previous years,” McNulty-King said. “Being forced to play inside, if she makes a roster, is going to help her in the WNBA because it made her stronger and play inside, and the more positions that you can play in the league, the better chance you have of making a roster. It made her more versatile in the long-run, but that kind of got her out of that spotlight that she was in last year.”

Christofferson may not be as quick as most WNBA small forwards, but she thinks her ability to step out and shoot 3-pointers at 6-foot-3 can help her make a strong argument for a roster spot.

“I have the height to post up, but being able to shoot the three, to step out on the perimeter is something most bigs can’t really (do),” she said. “That’s what I’ve been working on the most, is getting back to stepping away from the basket.”

Christofferson knows that she’s guaranteed of nothing aside from being seen by coaches in Phoenix. She’ll pack her bags and head to the southwest not knowing whether she’s staying for training camp, or for an entire season. Either way, she’ll have the opportunity to play overseas, because most WNBA players head to Australia, Asia or Europe in the offseason and earn comparable money.

But her time in Phoenix presents an opportunity to be seen, which could have implications down the road, as it did for Poppens last year. The 6-foot-2 forward was drafted by the Seattle Storm before being cut, but McNulty-King thinks her time in training camp played a big hand in her summer signing with the San Antonio Silver Stars.

“If Hallie makes it, it’s going to be awesome,” McNulty-King said. “But even if she doesn’t, it’s a great experience, it’s great for her resume, and it gives her a chance to be seen and compete at that level so, as we all know, when injuries happen, and stuff like players go down and players get cut, they have a chance to see Hallie and know what she can do and she has an opportunity to be called back in if she doesn’t play initially. And that’s exactly what happened to Chelsea last year.”