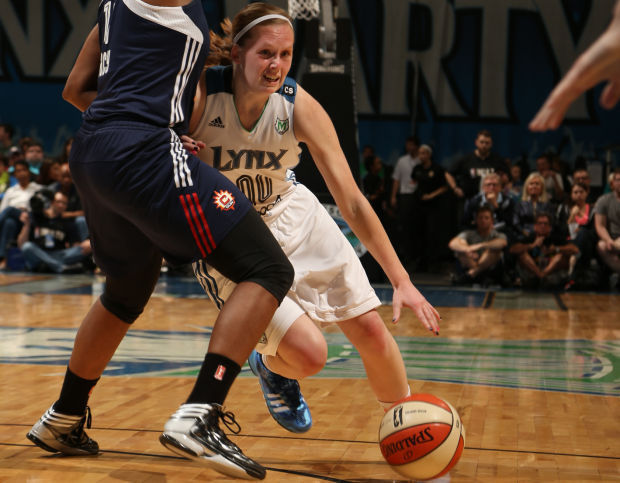 Christmas break is the best of all worlds for most college basketball players, a time where there are no tests to study for and nothing but hoops and fun to fill up your days.

That’s the way former Husker Lindsey Moore describes what it’s like playing in the WNBA.

“All you do is wake up and go to practice, then the rest of the day is yours,” Moore said. “No classes to worry about. My only focus is basketball.”

Moore is living in Minneapolis as a member of the Minnesota Lynx, which just swept the Seattle Storm in two games to advance to the Western Conference finals. She’s 20 minutes from the Mall of America, goes to restaurants, enjoys a nearby lake and, if she’s feeling particularly restless, burns off excess energy at Sky Zone indoor trampoline park.

As for the basketball, Moore is a rookie on the team with the best record in the WNBA.

“Honestly, I feel like I’ve improved in all aspects of my game,” Moore said. “I feel like I’ve taken my game another step and I feel like I belong. The more we’ve gotten into the season, the more confident and comfortable I’ve started to feel. “

Playoff rotations have tightened up, but Moore still contributed coming off the bench in the Seattle series.

"It’s been a process, especially from playing pretty much every minute to not playing as much,” Moore said. “It was good to work into it and not just get thrown into the fire right away as a rookie.”

Back in April, Moore was the 12th pick in the WNBA Draft, a first-round selection. She said former Husker Kelsey Griffin, who plays for the Connecticut Sun, gave her some valuable advice before her first training camp.

“She told me, ‘Don’t forget what allowed you to get this far and to get this chance. They picked you for a reason, so don’t try to change up your game now. Trust in and do the things that got you to that opportunity.’”

Moore went into training camp confident in her abilities and her preparation.

“I think I was mentally prepared. I know there’s nothing I can’t do,” she said. “I felt like I was in good shape when I walked in and we did similar drills as we did in college. Adjusting to the speed of the game, I wasn’t blown away because the game was faster. It’s just that more people on the court are fast. Positions 1 through 5 that are out there can score at any moment.”

Moore managed to get her trademark “00” uniform number — she only had to compete with the team mascot for it — and went to work.

Minnesota plays the Phoenix Mercury in a best-of-three series beginning Thursday for an opportunity to reach the WNBA Finals. Once the season is over, Moore will get about a week to rest before heading off to play for Lascivia in the Italian League.

Until then, she intends to enjoy the playoffs as long as they last.

“There’s a real family feel here in Minneapolis,” Moore said. “People want to see us. Our chemistry on and off the court is great. We play hard and play together and we play really good team basketball.

“It’s weird how playing basketball is like a job now. I really never consider it work if I get to wake up and love what I’m doing.”