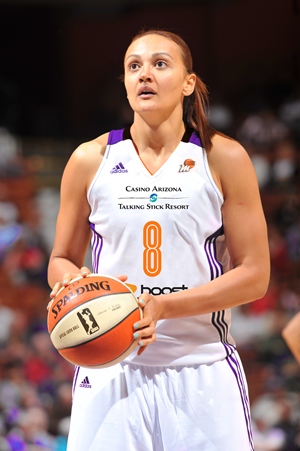 “Assembling a complete, championship-level roster requires depth at every position and toughness on both ends of the floor,” said Mercury General Manager Jim Pitman. “The addition of Mistie gives us an established defender and rebounder who will compete every day in practice and games and will make us a better team.”

The 6-3, 190-pound Bass is a seven-year WNBA veteran with Houston (2006-08), Chicago (2009-10) and Connecticut (2012-13). The 30-year-old Bass will bolster the rebounding and defensive toughness of the Mercury's frontline which already includes All-Stars Brittney Griner and Candice Dupree.

Bass owns career averages of 5.0 points and 3.3 rebounds, including an average of 1.4 offensive boards, in 185 games (46 starts), but has been even more productive her last two seasons. In her last two campaigns combined, Bass has averaged 7.5 points and 4.4 rebounds (1.6 offensive boards) in 18.3 minutes. A career 51.9-percent shooter from the field, Bass has set career highs in field goal percentage in each of the last two seasons (52.9 percent in 2012, 55.0 percent in 2013). A graduate of Duke University, the durable forward has appeared in 99 of a possible 102 games in her last three WNBA seasons.

A founding member of the longest-running, most successful women's basketball league in the world, this summer the Phoenix Mercury begins its 18th WNBA season. Behind Diana Taurasi and Brittney Griner, the sport's two highest profile athletes, the Mercury's chase for the franchise's third WNBA championship begins May 17. Secure your tickets today by logging on to PhoenixMercury.com.