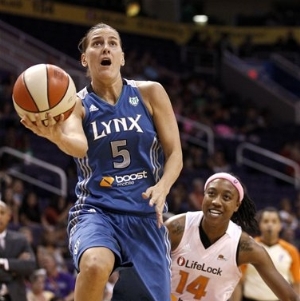 PHOENIX – The Phoenix Mercury has signed sharpshooting, veteran guard Erin Thorn, the club announced today. Per team policy terms of the deal were not disclosed.

“Erin is an outstanding shooter and will be a great addition to our team this season,” Head Coach and General Manager Corey Gaines said. “Her ability to stretch the floor will give us a lot of options offensively, and with the new defensive rule changes her skills will be a valuable tool in our arsenal.”

A 10-year WNBA veteran, Thorn spent last season with the Minnesota Lynx and the three previous seasons with the Chicago Sky. Over the past four seasons, Thorn is shooting 40.1 percent from 3-point range, the fifth-highest mark in the league in that timeframe. She is also shooting 40.9 percent from the field and 91.5 percent from the free throw line since 2009, making her the only player to reach the 40-40-90 benchmarks over the last four years. The 5-9 guard is a career 37.2 percent 3-point shooter, eighth-best among active WNBA players.

Thorn will join the most prolific offensive system the WNBA has ever seen, one that has led the league in scoring in six of the last seven seasons and set new WNBA records for scoring in four of those seasons, largely on the back of a 3-point attack. Since 2007, no team in the WNBA has made more 3-pointers than Phoenix’s 7.4 makes per game. During its two championships seasons (2007 and 2009) the Mercury averaged 7.9 long range field goals per game and shot 36.8 percent from behind the arc.

An alum of Bringham Young University, Thorn was selected 17th overall in the 2003 WNBA Draft by the New York Liberty where she spent the first six seasons of her career. In January 2009 she signed as a free agent with the Chicago Sky where she played three seasons before joining the Lynx for the 2012 season.

Thorn joins a Mercury roster that will include the top overall pick from this April’s WNBA Draft, in which the Mercury owns the No. 1 selection. The Draft will be held on April 15 in Bristol, Conn., and will be broadcast in primetime on ESPN2.

The top pick in the most anticipated draft in league history will make her WNBA debut on May 27 when the Mercury hosts the Chicago Sky, owner of the second overall pick. Tipoff is schedule for 2 p.m. and will be broadcast on ESPN2. Flexible ticket packages are available by calling 602-252-WNBA or visiting phoenixmercury.com.