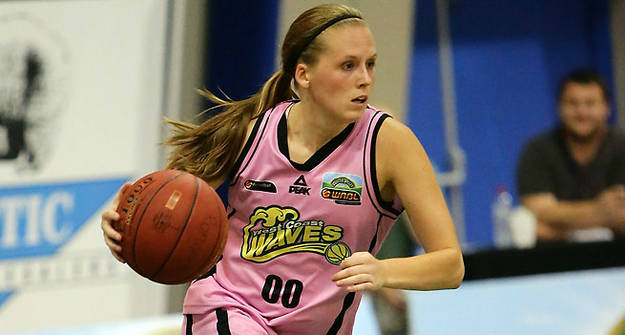 When Lindsey Moore was cut from the Minnesota Lynx, she said it was tough to leave her championship-winning teammates, like losing her best friends.

Moore got on with life though, and there was something specific she wanted to do next.

“I told my agent I wanted to play in Australia and if she could make that happen it’d be great. She came back to me and said, 'I have an offer for you',” she said.

But signing with the West Coast Waves brought the 23-year-old face to face with one of her greatest fears, and her paranoia about swimming at the beach was a source of great amusement for her new teammates.

“Shark Week (a week-long programming block about sharks on the Discovery Channel) is pretty big back in the States and when I watched it pretty much everything was off the coast of Australia,” she said.

“So usually I would just go out to my waist and no further.”

It hasn’t taken the feisty point guard long to overcome her demons, however, even taking up snorkelling off Perth’s beautiful coastline despite the occasional setback.

“It’s gotten better. There have been a couple of scares off Scarborough Beach when they had the shark warning go off, so usually I give it a couple of days before I go back in the water,” she said.

Tackling obstacles head-on is the story of Moore’s career. One example was when her father enrolled her in a University of Washington basketball camp for high-schoolers while she still in middle school.

Rather than hide among the bigger kids, Moore dominated the camp and caught the attention of UW assistant coach Kellie Lewis-Jay, who asked what high school she attended.

“Without thinking I told her my middle school,” Moore said.

“She said, ‘You're only in eighth grade?’ She was pretty shocked and it was then I first thought, 'This is pretty cool, I could be pretty good at this'.”

Incredibly, that performance as a 13-year-old would set up Moore’s record-breaking career at the University of Nebraska.

“The coach I talked to at the camp, she had left the University of Washington and gone to Nebraska. She took all her recruiting stuff with her and I was still in her file,” Moore said.

However, it might have all ended before it started had Moore let her preconceptions get in the way.

“I got an email from her at Nebraska. It was funny, when I first got it I was like, ‘Why in the world would I want to go to Nebraska?’” she said.

“My dad and I went there on an unofficial visit in my junior year of high school and checked it out – and I loved it … the people from the mid-west are by far the best people in the United States, the most genuine, sincere people.”

After joining with Kelsey Griffin to help the Huskers to their first Sweet Sixteen appearance in the NCAA Tournament, Moore repeated the dose in her senior year while notching enough accomplishments and assist records to fill a book.

“It’s been so surreal the success I've been able to have, but obviously the thing I love about basketball is it’s a team sport. I have a whole bunch of assists, but I can’t assist myself so it’s my teammates too,” she said.

“People helping me by setting great screens or finishing around the baskets or making tough shots, I by no means throw the perfect pass every time.

Next up, the Lynx came calling in the WNBA draft. And on arrival Moore almost felt like she was swimming in a shark tank.

“I was so nervous, I was beyond nervous,” she said.

“Everyone kept telling me when I got drafted, ‘Don’t forget you deserve to be there’.

“But it’s easy to say that. When I looked around at training camp I had Maya Moore, I had Seimone Augustus, I had Lindsay Whalen – all these big-name players I had grown up watching and thought were complete studs.

“So no big deal, I deserve to share the court with them – are you kidding me?”

The high of a WNBA championship followed, then the low of being waived. But the Seattle native is taking the journey in her stride, soaking up Perth as she did historic La Spezia last season.

“Italy is old towns and beautiful buildings and Perth is so nice with the beaches,” she said.

“It’s so cool how basketball can bring you so many different places.”

Moore has been “doing all the touristy” things Perth and surrounds have to offer, and while the Waves’ injury-riddled season has “been tough” she is still loving the journey.

“Some people would think we aren’t going to get out of those lows, but the cool thing about it is our chemistry off the court is awesome. We get along so well and I think that’s helping keep us connected on the court.”

And Moore is even willing to brave the sharks for another Australian summer.

“I hope so, I've still got to talk to my agent and get that sorted but I would love to come back,” she said.