Tulsa Shock newcomers give fans something to cheer about. 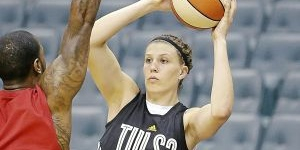 About 200 season ticket holders watched Sunday as the Tulsa Shock opened training camp, and Nebraska rookie Jordan Hooper gave them something to cheer about.

The 6-foot-2 forward made shot after shot as new head coach Fred Williams ran his players through a roughly 2 1/2 hour session at the BOK Center.

"I just shot the open shot when I got it, and the crowd was great," Hooper said. "I didn't realize there was gonna be that many people here, so that was cool to see."

Williams said the crowd made a satisfying first day even better.

"I loved it. I think every team should have a session like that. It shocked me that there were so many people out there, especially for a Sunday," he said.

The fans stood and cheered when the team came out of the tunnel and roared with approval at various stages.

"That standing ovation made the players feel like Tulsa really appreciates them," Williams said. "They felt like, `I'm gonna fight for these fans.' "

Williams could find little to complain about, given that three of the team's best players and four in all won't report for the first several days. "I'm pretty pleased with what I see right now," he said.

Williams and assistants Bridget Pettis and Ed Baldwin put the players through a series of drills and then ran them in offensive sets against male practice players led by former Oral Roberts University and Memorial High standout Kelvin Sango.

"I thought (we) handled it pretty well. There were not a lot of turnovers. I thought we got a lot of shots in and that's the style that I want to play," Williams said. "We're gonna utilize our guards a lot, getting to the rim but also being creative."

Things got interesting when Williams put Diggins, Sims and shooting guard Roneeka Hodges on the floor at the same time.

"It was hard for the guys to double-team or help off of (Sims or Diggins) because you had scorers all over the perimeter with Hodges out there, too," Williams said. "And that opened up the middle more for (veteran center) Courtney Paris, who I really like right now in training camp."

Sims said she was a little pooped when practice ended, even though "coach didn't work us too hard today. I didn't know what to expect, but it was pretty good."

A little weariness can be expected from a player who just carried Baylor to an NCAA Elite Eight finish and has been in a whirlwind since the WNBA draft two weeks ago.

Sims said the older players seemed to want to help the newcomers find their way.

"The veterans are really nice. There's five rookies here and we're all trying to make the roster, so (the veterans') help is really helping out a lot. I didn't expect that coming in," she said.

Veteran forward Jennifer Lacy said she liked the structure and instruction of the first practice.

"There's definitely a new energy out here and everything is totally different," she said. "There's just a great sense of accountability going on, a lot of teaching and a lot of constructive criticism. It's just an overall fun atmosphere, and I see that carrying over to the entire season."

Juliunn Redmond
JuJu has signed in Spain with Gran Canaria for the 2022-23 season!

Mehryn Kraker
Mehryn has signed in Germany with Rheinland for the 2022-23 season!

Jannon Otto
Jannon has signed in Luxembourg with Musel Pikes for the 2022-23  season!

Jamie Cherry
Jamie signed in Iceland with IR for the 2022-23 season!